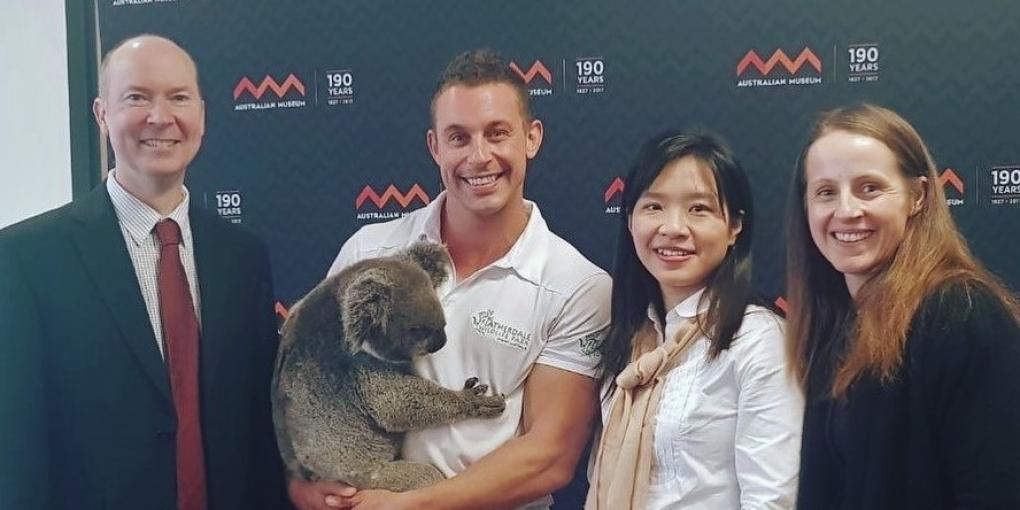 Centre staff were among a team of Australian and international scientists who sequenced and assembled the genome of the koala. This has provided new insights into the unique biology of the koala and will inform conservation efforts, aid in the treatment of disease, and help to ensure the koala's long-term survival.

The consortium of scientists comprised 54 scientists from 29 different institutions across seven countries, led by Professor Rebecca Johnson, Director of the Australian Museum Research Institute, and Professor Katherine Belov, University of Sydney. The findings were published in Nature Genetics.

The team sequenced over 3.4 billion base pairs and more than 26,000 genes in the koala genome – which makes it slightly larger than the human genome.

Unlocking the genomic sequence gives scientists unprecedented insights into the unique biology of the koala: the highly accurate genomic data will provide them with new information that will inform conservation efforts, aid in the treatment of diseases, and help to ensure the koala’s long-term survival.

The koala genome, which is slightly larger than the human genome (3.5Gb v 3.2 Gb), was sequenced by the Centre using PacBio long-read sequencing technology. The project took 10 months to complete, required 272 PacBio SMRT cells and generated 200Gb of sequence data.

The genome was assembled by the UNSW Systems Biology Initiative (SBI). “We sequenced and then assembled the genome with supercomputers, allowing the consortium to study the >20,000 genes of this unique species,” said Professor Marc Wilkins, Director of both the Ramaciotti Centre for Genomics and SBI.

“We did so using new technology which can sequence very long pieces of DNA. This allowed us to do a very high-quality genome assembly – meaning that the result is the best marsupial genome to date, and one that’s on par with the human genome in terms of its quality, which is incredibly exciting.

“Because of its high quality, this genome is now a fundamental resource for all the other marsupial genomes which have yet to be generated and studied. We will be able to use this as a reference for the entire marsupial community.”

Professor Johnson added: “The Koala Genome Consortium has been an ambitious journey, affording us great insights into the genetic building blocks that make up a koala – one of Australia’s, as well as the world’s, most charismatic and iconic mammals.

“This milestone has come from our vision to use genomics to conserve this species. The genetic blueprint has not only unearthed a wealth of data regarding the koala’s unusual and highly specialised diet of eucalyptus leaves, but also provides important insights into their immune system, population diversity and the evolution of koalas,” she said.

According to Professor Belov, another important discovery was the characterisation of the composition of koala milk.  Like all marsupials, koalas do most of their development in the pouch. They are born without an immune system after 34-36 days gestation and spend ~6 months developing in the pouch.

“We characterised the main components of the mother’s milk – which is crucial for koala joeys,” Professor Belov said. “We identified genes that allow the koala to fine-tune milk protein composition across the stages of lactation, to meet the changing needs of their young.”

“Thanks to the high-quality genome, the team was able to analyse and discover koala-specific milk proteins that are critical for various stages of development. It also appears these proteins may have an antimicrobial role, showing activity against a range of bacterial and fungal species, including Chlamydia pecorum, the strain known to cause ocular and reproductive disease in koalas,” Professor Belov said.

Chlamydia causes infertility and blindness and has severely impacted koala populations in New South Wales and Queensland. Using information gained from the koala genome, scientists hope to develop a vaccine to fight diseases like chlamydia.

One of the most threatening processes to koala survival is loss of habitat through land clearing and urbanisation, which results in a reduction of habitat connectivity, reduced genetic diversity and puts koalas at high risk of inbreeding. The results of inbreeding can be highly detrimental to the survival of those koala populations, as it leads to reduced genetic diversity.

“For the first time, using over 1000 genome linked markers, we are able to show that NSW and QLD populations show significant levels of genetic diversity and long-term connectivity across regions,” Professor Johnson said.

“Ensuring this genetic diversity is conserved in concert with other conservation measures to protect habitat, reduce vehicle strikes, dog attacks and disease is the keys to the long-term survival of the koala.”

All of the sequence data generated by The Koala Genome Consortium has been deposited into public databases and made freely available to scientists around the world.

The story made headlines around the world being picked up by CNN, National Geographic, New Scientist, the ABC and the Australian and positioned the Centre as the leading facility in Australia for the sequencing and assembly of de novo, mammalian genomes.

The Ramaciotti Centre staff would like to take this opportunity to thank you for your support throughout the year and wish you a safe and happy holiday.

COVID-19 has had a dramatic impact globally and locally, and will continue to do so for some time.